3/12/2021
written by Lauren Butler
Work hard. Be well spoken. Attend a good school. Do the right thing. On top of all of that, be stronger, faster, and more intelligent, because then you might be considered equal. This is the advice Melvin L. Jones, Hawken class of 1988, received from his parents.
“It is souring to think that you have a great education from a prominent school, you’re well-spoken, and you do everything right, and you think you’ve made it, but then something happens where society tells you no,” Jones explained. Despite that, Jones never stopped taking chances, seizing opportunity, and striving for excellence.

During the fall of 1985, Melvin L. Jones, made the move to Hawken School that would change his life. The exposure to different cultures and lifestyles was something that Hawken was able to offer to Jones that Warrensville Heights just could not.

“My parents were educators and believed that one way to show that you were equal and to minimalize racism was to become educated,” Jones reminisced. This is the reason why Jones’ parents prioritized sending their son to Hawken.

Being an established member of the predominantly black Warrensville Heights community in mid 1980s, 16-year-old Jones was not necessarily excited by the thought of transferring to Hawken. “At first, I wasn’t receptive to the move, because I didn’t want to leave my friends and my comfort zone,” Jones stated. “It is hard for anyone to leave an environment in which they feel comfortable.” Luckily for Jones, two other members of the Warrensville Heights community and two students from Cleveland were also headed to Hawken, giving him some friends to lean on when times were tough. 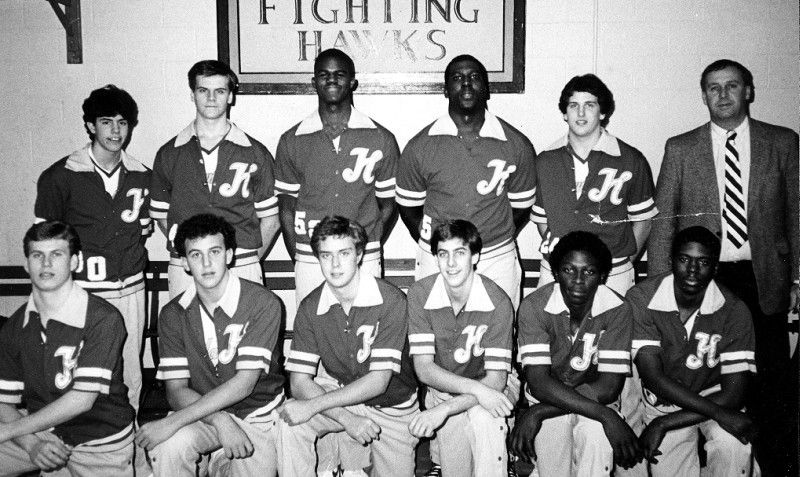 1985-1986 Winter Basketball Team (Jones, 4th from right, back row)
The self-deemed Juice Crew that consisted of Melvin Jones, Will Appling, Owen Benjamin, O.J. McDuffie (Hall of Fame Class of 2014), and Marcus Teague brought a fresh attitude, diversity, and a little bit of swag to the Hawken community in ways the school had not seen before. Unfortunately, new is not always met by all members of a community with open arms. 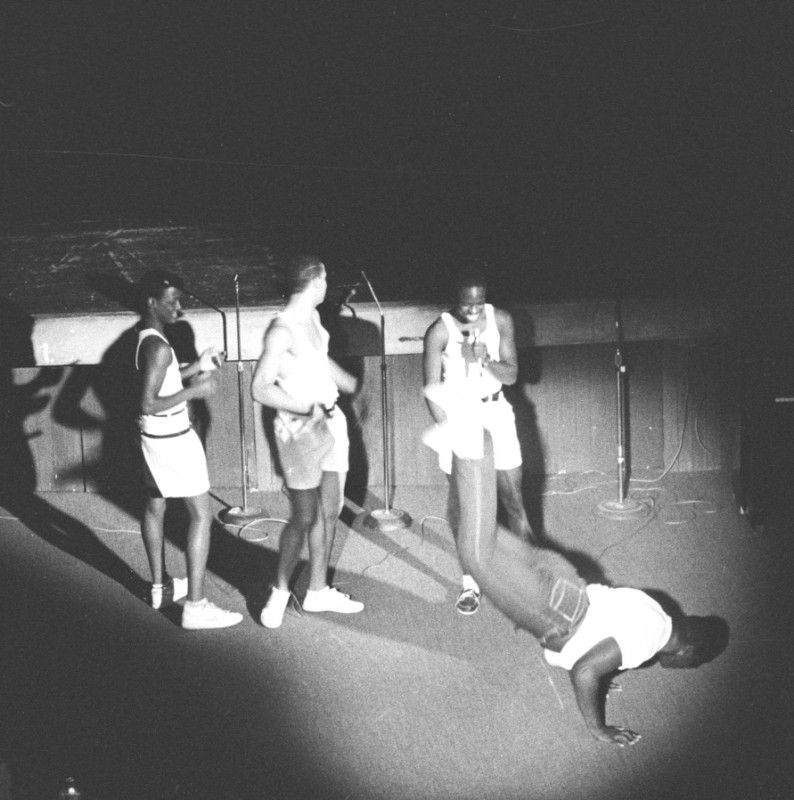 Jones dancing with group “Upbeat” for school assembly
One day before football practice, the Juice Crew was listening to some rap music in the locker room when an upper classman entered, took the tape from the player, and threw it in a locker. He then declared that “jungle music” is not what students listen to at Hawken. Jones reflected, “It was an unsettling experience because that was not the way we refer to our music, and it was an instance of stereotypical racism.”

While a few unfortunate incidents came to light, the Hawken experience provided a great deal for Jones and the Juice Crew. Hawken was more diverse than Warrensville, and according to Jones, it was motivating and pushed him and his friends to seek out opportunity instead of waiting for it to come to them. “It was shocking to see other black people at Hawken who grew up in a completely different environment than I had,” Jones explained. “This made me realize more than ever that someone who looks like me can drive the nice car or live in the big house.” 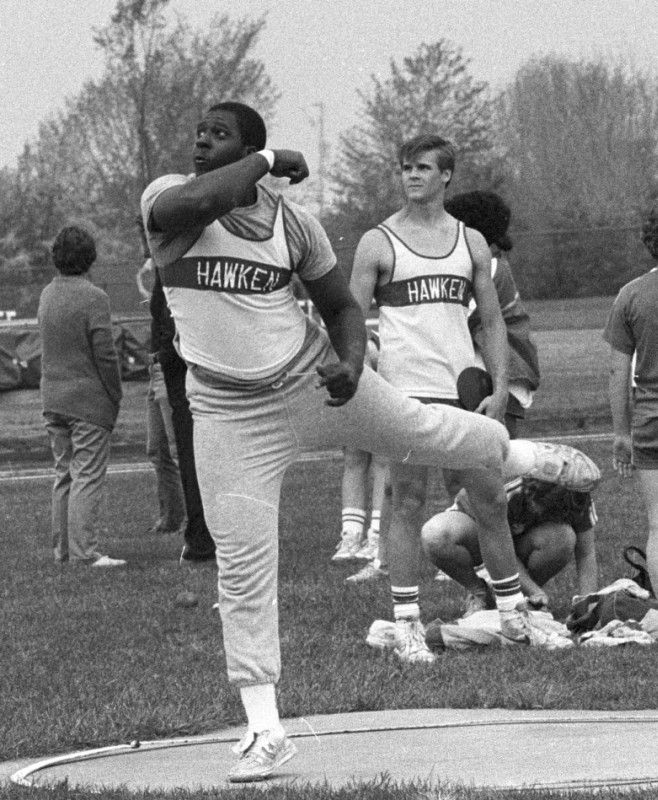 Jones throws discus, 1985-86 Spring track season
With this knowledge and experience, Jones pushed forward in his academics and athletics career, despite some roadblocks along the way. There was a period when Jones was unable to keep his eyes open in the classroom and felt less than his best on the field. Come to find out, Jones was diagnosed with sleep apnea. Throughout his struggles, he really leaned on Hall of Fame inducted Coach Cliff Walton, who was a constant source of positivity. Coach Walton did not know about Jones’ health struggles but never hesitated to remind him of his potential. “Coach Walton always preached excellence with no regrets,” Jones stated. “When you are around a man like that, who has such an influence on young men’s lives, you keep and cherish those values.” According to Jones, Coach Walton was a significant source of his inspiration to pursue excellence with no regrets, which led Jones to write his second book, The Onyx Renaissance, which was published in July of 2020 and is available on Amazon.
With two books under his belt, Melvin Jones plans to write a third, which will serve as a branch from The Onyx Renaissance. Jones is also looking forward to working as an umpire for more tournaments in Cooperstown as well as continuing to teach elementary school at Warrensville Heights Elementary. “One of the best parts about being a teacher,” he notes, “is that while I am educating the students, they are also educating me in so many different areas.”
Jones likes to ensure that each student he works with receives plenty of positive reinforcement and encouragement to try new things. “Being able to write books has given me the opportunity to show the next generation that there are opportunities for them out there outside of what they may believe is available,” Jones said. 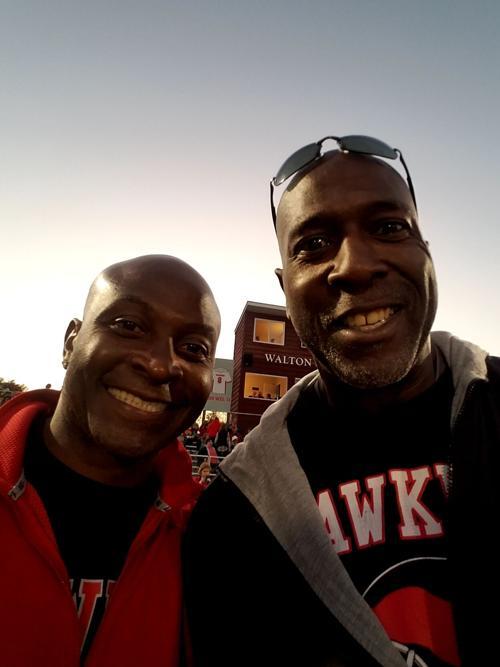 Jones with Classmate OJ McDuffie, show support to Hawken Football program
30 years after they led it to a Div IV state runner-up campaign
“I would tell students today to never give up,” Jones said. “This country is changing demographically, culturally, racially, in gender, and the current students have the opportunity to be a part of that. I am proud of this generation. They are a lot savvier regarding politics and social injustice. When I was growing up, we knew about issues around the neighborhoods, but we didn’t have the vast amount of information that is available to our youth today.” 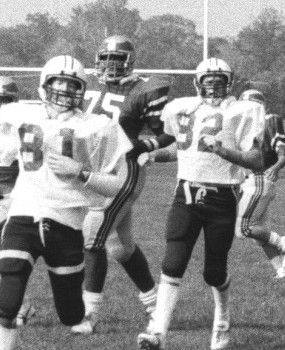 Mel Jones #75, home football game 1985
“I always tell people to outline their life in pencil, not pen,” Jones informed. “If you write it in pencil and things aren’t going according to plan, you can erase and make a change; but if you write your outline in pen, it is much more difficult to make a change that could benefit not only you, but those around you.”
Back