Why Indigenous Peoples’ Day is a More Equitable Columbus Day

10/12/2020
Jacob Kordeleski
“He has … endeavoured to bring on the Inhabitants of our Frontiers, the merciless Indian Savages, whose known Rule of Warfare, is an undistinguished Destruction, of all Ages, Sexes and Conditions.”

So speaks the Declaration of Independence, the document most revered for its Americanism aside from perhaps the Constitution. Just paragraphs after the famous statement that “All men are created equal,” an entire continent of native peoples is reduced to a group of “savages.” How is it that our nation, which prides itself on freedom and equality, inflicted so much hate and hardship on the natives that call America their homeland? Why do some institutions (such as Hawken), choose to celebrate Indigenous People’s Day on October 12, while others choose to celebrate Christopher Columbus, the man who enabled this injustice? 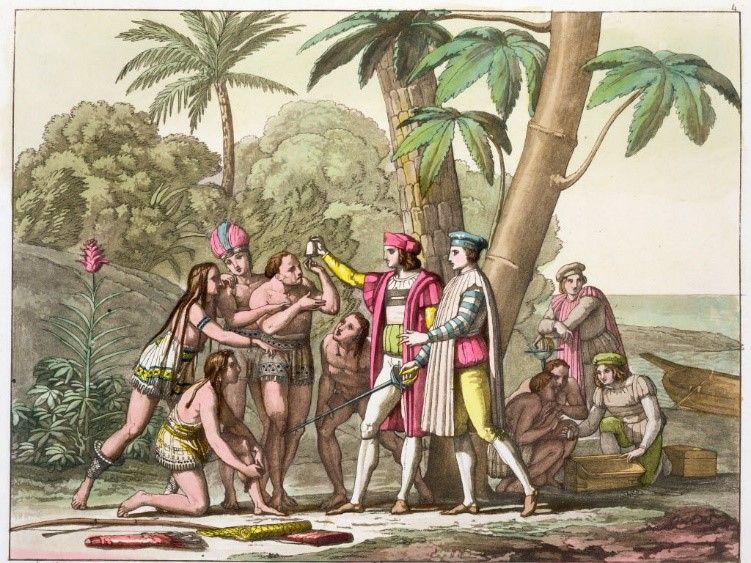 Christopher Columbus lands in Hispaniola. Getty Images.
It all goes back to colonialism. “Colonialism” simply describes the efforts of one group to expand their culture and economic power to another group. While the idea of colonization has been around for thousands of years – the Ancient Greeks, Egyptians, and Romans all founded distant colonial cities – it was Christopher Columbus’s 1492 landfall in the Caribbean that allowed the institution to expand to a massive scale. From the 16th century, the European powers began a heated battle to assert dominance over one another in territories around the world. America, Africa, and Asia were the battlegrounds; millions of indigenous people were the collateral. ’Indigenous’ refers to those groups whose ancestry has always resided in the area they currently live.” Countless indigenous peoples were conquered, forced away, or outright destroyed. Very diverse areas, like Africa, had their borders and communities reshaped in an arbitrary manner that causes conflict to this day.

The empires of the world and their territorial claims in 1800.
Public domain. Wikimedia Commons George Tsiagalakis.
You might recognize the evils of colonialism but think that the United States, as a former colony itself, is exempt from these issues. Post-1776, however, the United States systematically destroyed the indigenous way of life across North America. An endless series of treaties that were deceptive, signed on faulty grounds, or outright broken, stole the land that many tribes had inhabited for thousands of years. Even the land upon which Hawken Middle School sits was seized in a devastating military conquest. The 1795 Treaty of Greenville signed this land away after the United States claimed the Ohio River Valley had always belonged to them. 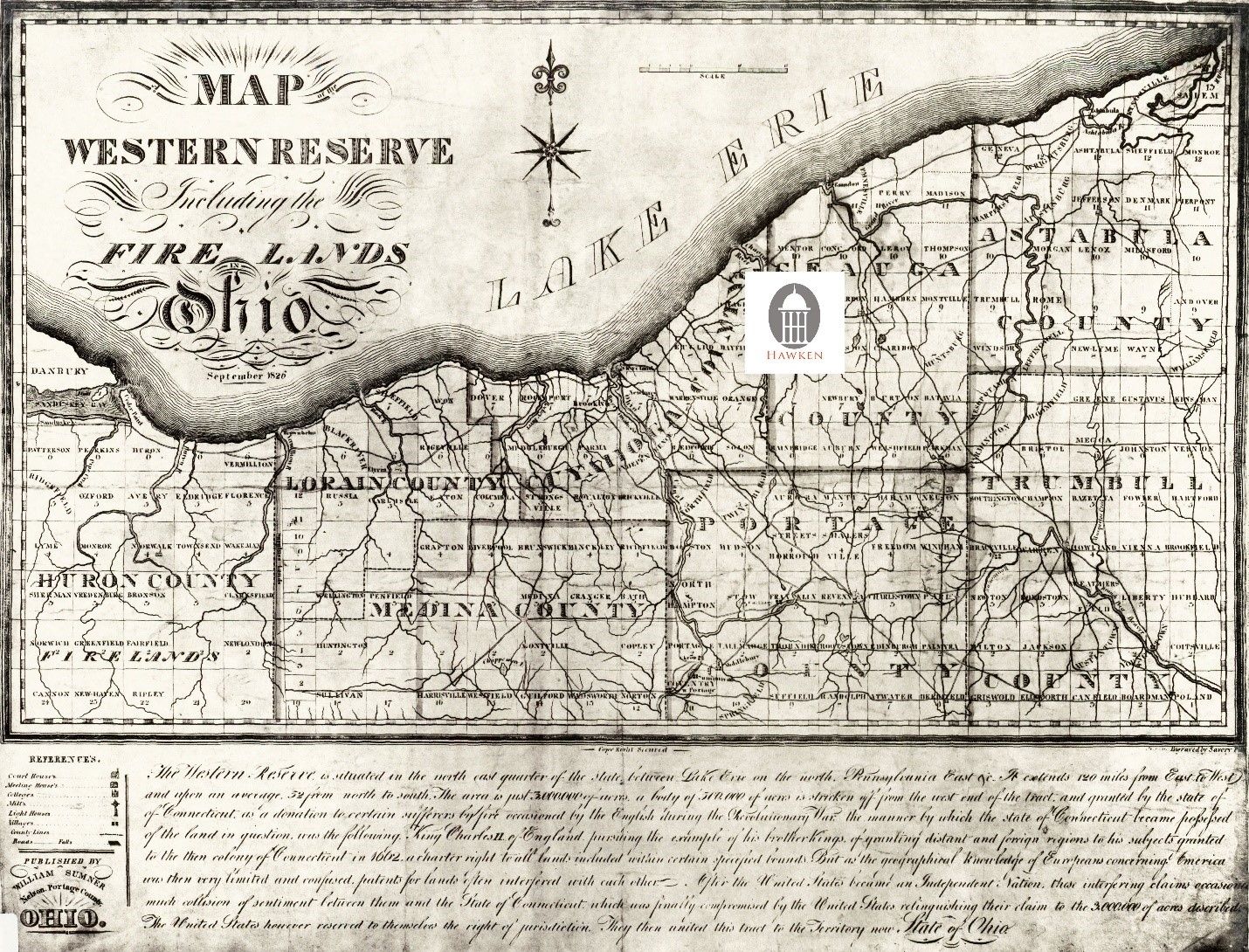 The Western Reserve, land taken in the Treaty of Greenville (1795),
with Hawken superimposed. Map Cleveland Public Library.
The indigenous peoples of North America constituted a beautiful diversity of art, life, and culture before the conquest of the continent. Unfortunately, much of this culture was destroyed intentionally. In the 19th century, many were forced into boarding schools that punished students for speaking their native languages, effectively destroying the greatest link to their culture. Those that did manage to obtain tribal lands were moved off their cultural homeland and onto arid, desolate reservations.

A timelapse of Indian land seizures by the United States. From “Invasion of America,” eHistory.org.

Despite this historic injustice, the United States has progressed greatly in the last century. Just as we have improved the equity for some disenfranchised groups, we have recently been able to recognize some of the wonders of Indigenous life in America. For thousands of years, the American Indians were able to forge a sustainable relationship with the environment. Take the wildfires that have devastated the Western U.S. in the past few years as one example. The indigenous cultures understood that forest fires occur naturally, but may be controlled by cutting down a few trees among many. The U.S. timber companies that logged the West, however, stripped whole acres of trees at a time. This created the buildup of short, quick-burning brush that has fed the terrible fires of our present day. 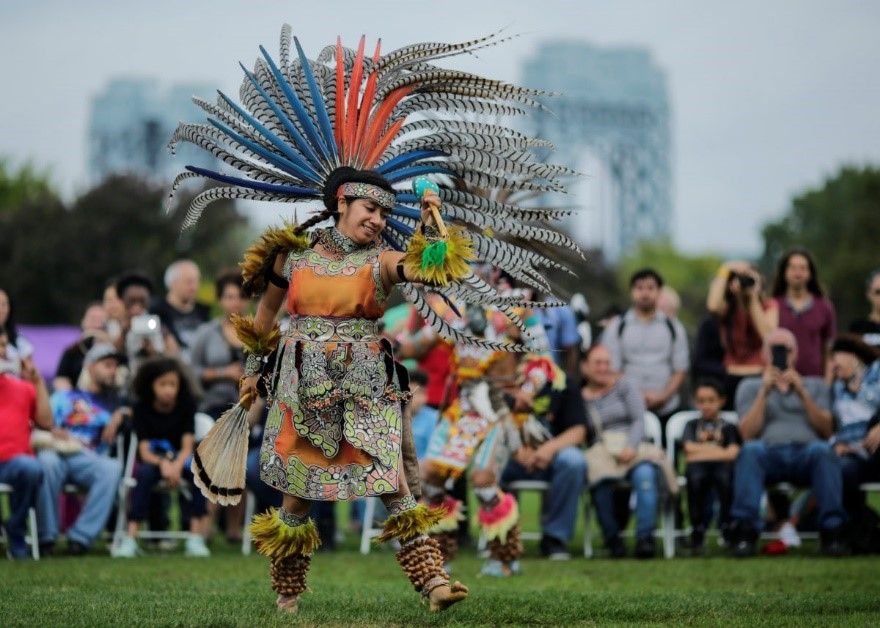 Since 1968, the United States has celebrated October 12 as Columbus Day, while some places, like Randall Island, NY, choose to celebrate Indigenous People’s Day. Photo Reuters.
Life – and with it, hope – does continue for the Indigenous American. Just recently, the Supreme Court ruled that nearly half of Oklahoma belonged to a few Indian communities based on a historic, forgotten treaty. Around the world, many individuals work to share the stories of indigenous people and their cultures. So if we feel shame for the injustice done to the indigenous people of the world, what can we do? For starters, let’s recognize the beauty of indigenous culture by celebrating Indigenous People’s Day instead of Columbus Day. Furthermore, indigenous peoples maintain the most sustainable and environmentally-friendly societies on the planet, yet suffer most from pollution and climate change. If we can support the planet and environment in our own communities, we can begin to appreciate the indigenous lifestyle. Lastly, simply telling the indigenous story is an important first step to recognizing the injustice.

This year, nearly half of Oklahoma was deemed Indian Land by the Supreme Court.
Photo Oklahoma Department of Transportation.
And if you are still not satisfied, I leave you with Jane Goodall, one of the most significant scientists of the 20th century, and her answer to the question “How can an individual person make a difference?”

“You just have to return to the Indigenous wisdom on making of making a decision based on, how will this help seven generations ahead? We tend to make decisions based on, how will this help me now? Or in, my next shareholders meeting, or in my next political campaign. And, so, if we think about the consequences of the little choices we make, like ‘Was it harmful to the environment?’ ‘Did it cause suffering to animals?’ Or, did it permit child slave labour, or something like that, think about those consequences and find a way to link our clever brain with love and compassion — the human heart. Because I truly believe only when head and heart work in harmony, can we attain our true, human potential.”
Back